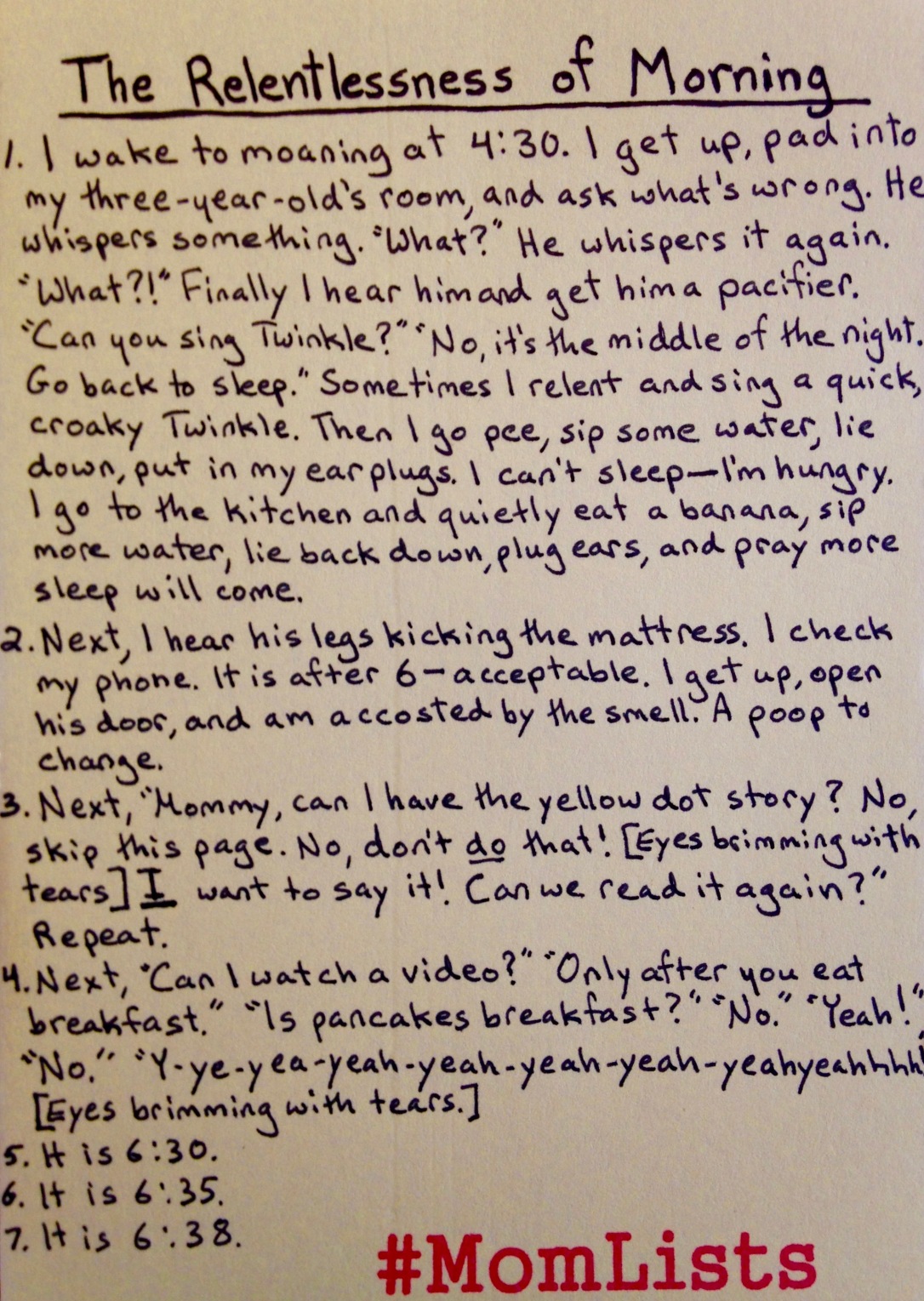 Minna Dubin is a writer, performer, and educator in Berkeley, California. She is the founder of #MomLists, a literary public art project, which she is working on turning into a book. Her writing has been featured in Parents Magazine, Huffington Post, MUTHA Magazine, The Forward, and various literary magazines and anthologies. When not chasing her children in circles around the dining room table, she is eating chocolate in the bathroom while texting. You can follow her lists about motherhood here:

The Relentlessness of Morning was first posted on a bulletin board at a San Francisco grocery store called Falletti Foods @fallettifoods.
MomLists’ was then published on social media (Tumblr, Twitter, Instagram and Facebook) on October 4th, 2016.

Mother Makers is a network for exchange and dialogue for mothers trying to find their way back into their art/design practice after having children. Mother Makers actively examines the process of art production as a mother with the aim of developing strategies and creating opportunities that are tailored specifically towards the needs of the maker-mother. It is a support system for creating work that embraces the limitations of childcare at it’s core. By seeking visibility it is our intention to reclaim a space within our discipline, as well as in the wider arts for mothers like ourselves. We are mothers who make. We make and care with equal commitment, drive and energy. We aim to make visible and challenge prevailing attitudes towards motherhood and creativity through active engagement within our discipline of jewellery and design. Often motherhood has been seen as the antithesis of the production of worthy art. We reject this outdated mode of thinking and propose the presence of motherhood as an essential part of women’s work being valued accurately. About the founders: Laura Bradshaw-Heap (UK) is a freelance curator, arts practitioner and ethnographer and mother. She has a MSc in social and cultural anthropology from University College London and an MA in design from London Metropolitan University. Bradshaw-Heap is most interested in projects that are research based and involve turning the audience into active participants in some way. Her methods are drawn from across disciplines. Her research interests include the making economy, performativity, aesthetics, the politics of voice, feminist studies and participatory art. Laurie Schram’s (NL) often satirical work revolves around themes of a socio-political nature and status through objects. A relationship between the fictional and the non-fictional has been an important theme. Schram graduated from the Royal College of Art with work mainly focused on altering existing currencies and creating new ones by combining countries and rewriting narratives. She went on to build a fictional jewellery factory as Schram&Sandhu focussing on collaborative work as well as writing and recently having a child. View all posts by mothermakersblog